The Truth about our Gender Reveal

I’m taking a deep breath as I sit down to write this, because it’s going to be honest and vulnerable. I have a hot cup of tea, next to me. Georgie is fast asleep and I’m feeling the faintest flutters in my tummy. I’d forgotten what those flutters felt like and I love them. I’m so excited to feel them get stronger. The kicks were my absolute best feeling.

By the way, you might want to get a cup of tea yourself – this is going to be a long read. Bare with me as I bare my soul.

When people found out I was pregnant again, immediately people started saying: “Oh I really hope it’s a girl this time.”

We were pretty convinced we would have a girl. Maybe it’s also part society – you know? The pigeon pair. The Cereal Box Family. I got excited about this little “girl” and I imagined a life/ a picture with her. We even had her name.

At 10 weeks we did the NIPT Test – it tests for chromosomal abnormalities and as such, is also able to check the gender. After 7 working days (so 10 agonisingly loooong days in total), we got the results. In fact I was told that the results had come in, but my Gynae was in theatre and would call me once he was back in his rooms. Agony of waiting.

That afternoon, George and I went everywhere with Sox – running all his errands with him – just so we could be together when that call came in and we’d hear the news together.

After all Sox’s work was done, we decided to head to the promenade where George could ride his bike a bit and play on the swings. At around 16h30, my phone rang. It was a private number – I never answer those.

I answered. It was the call.

“Hi! I have your results! Everything has come back healthy and normal. Wonderful news.” Sox and I breathed out… Relief. Gratitude! “I also have the gender results if you would like to know.”

“Congratulations! You’re having another boy!”

Those words sank in, I remember thanking him and putting the phone down and while I stood on the Sea Point promenade, bursting into tears. The idea/picture of a daughter popped like a burst bubble and visions of braiding her hair, pink ballet slippers and just experiencing a daughter as a whole got whipped away.

I then felt the worst guilt I’ve ever felt in my life.

We had just got the BEST news – a healthy baby boy and I was sobbing my heart out, while people were jogging past, walking their dogs and Georgie was smiling away, completely unaware as he rode his bike saying “Weeeeee!”

Gender disappointment is completely natural, but no one talks about it and I understand why. If you mention it, people immediately judge you for being ungrateful. You know that I am very sensitive to those who can’t have kids, or are struggling to conceive and I felt so ashamed.

That evening I had a good cry (a few times) as I mourned the loss of never having a daughter and the guilt I felt for even feeling this way. Unless God has a different plan, our plan has always been to only have 2 children.

This might sound really silly, but I’m a visual person and the next morning, I opened up Pinterest and looked at Boy Mom pics – it really helped, in a strange way.

I got some incredible advice from a friend who said this:

Try to remember that you are having another child because you want another child- not because you wanted a girl! Realistically it was a 50/50 chance, and you get what you get!! That also being said, it’s ok to be disappointed, and don’t feel guilty about that!… You do however need to let it pass and as you said get over it (may sound cruel) but if you let it consume you, it will be to the detriment of you and your baby!!

It was exactly what I needed to hear and she was right!

I chatted to a few people who admitted their own gender disappointment and how it had even brought on depression. I didn’t want that because this baby is a blessing and I love it regardless of whether it’s a boy or girl. I looked at my belly and knew in that moment that God never makes mistakes and that I was destined to be a Boy Mom. George is going to thrive being a brother and having a brother – besties for life!

I can truly tell you that I am besides myself with excitement to be a Mom to two little boys. I remain the Queen of the house! Ha! I am also surprised and proud of myself with how quickly it took me to mourn the “loss” and get excited. Less than 48 hours.

George is the most incredible little boy and I am so honoured that he chose me. I can’t believe I’ve been chosen again by this new soul.

We revealed our pregnancy 3 weeks later but didn’t reveal the gender. I wasn’t ready yet and I’ll tell you why…

All innocent. All well-meaning. All triggering.

I suddenly felt like I was disappointing people. I realise how utterly ridiculous that sounds, but it’s how I felt.

Those who did find out said things like: “Oh shame. Oh no. Well, you’ll have to go for the 3rd.”

Like this baby wasn’t enough, or was some sort of consolation prize.

I wasn’t ready for the comments. I needed to grow a thicker skin.

So what happened next was a comedy of errors – an error that I made.

YOU Magazine contacted Sox’s agent to do a sweet announcement in the Scene & Heard section of the magazine. We had to answer Q’s. I was not thinking properly – proper Preggy brain – and I got into the mode of answering these questions in the excitement of the pregnancy, and not with the publication in mind.

The magazine came out and I shared it on my Instagram page. 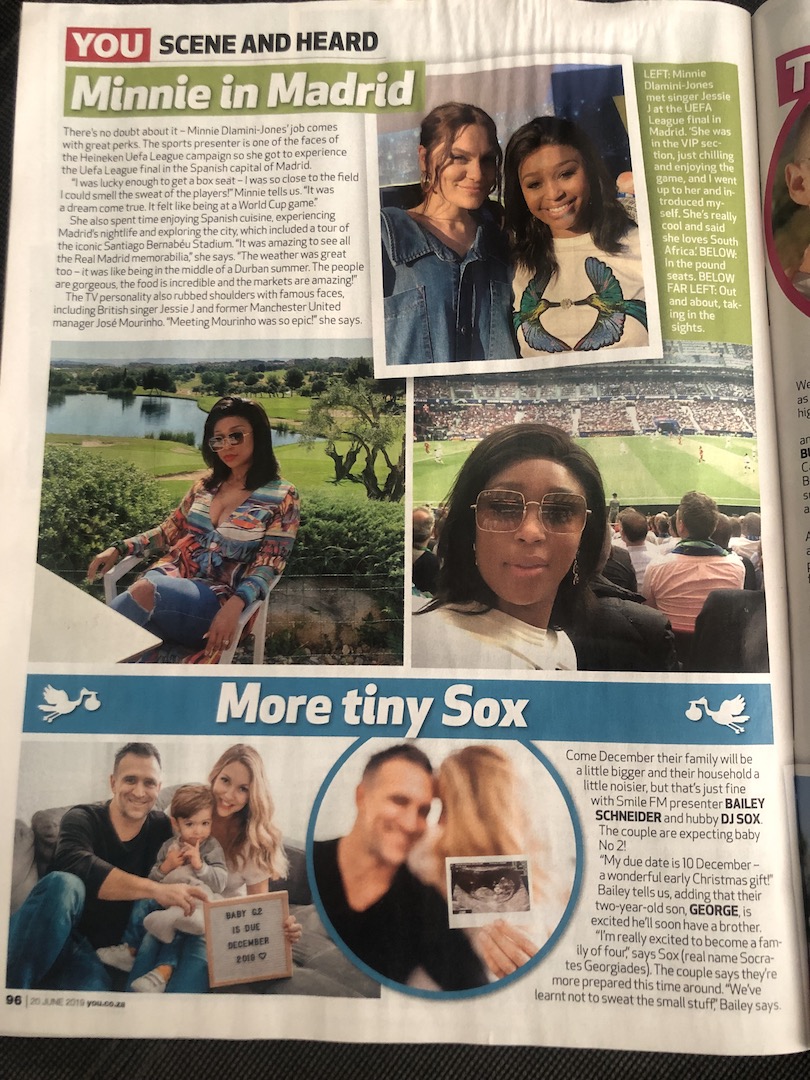 All of a sudden DMs started pouring in from people saying: So it’s a boy?

I was taken aback. Were they assuming from the blue heading? It was only when a friend highlighted a sentence that I hadn’t read properly – or read what I wanted to read.

I couldn’t believe I’d made the error and when I went into my email sent items, I saw that I had answered the gender question – one I was meant to leave blank.

By default YOU magazine got the exclusive… and so we made our gender announcement the next day, sooner that I had thought we would.

I shared this on Instagram and then a swipe for the next video: 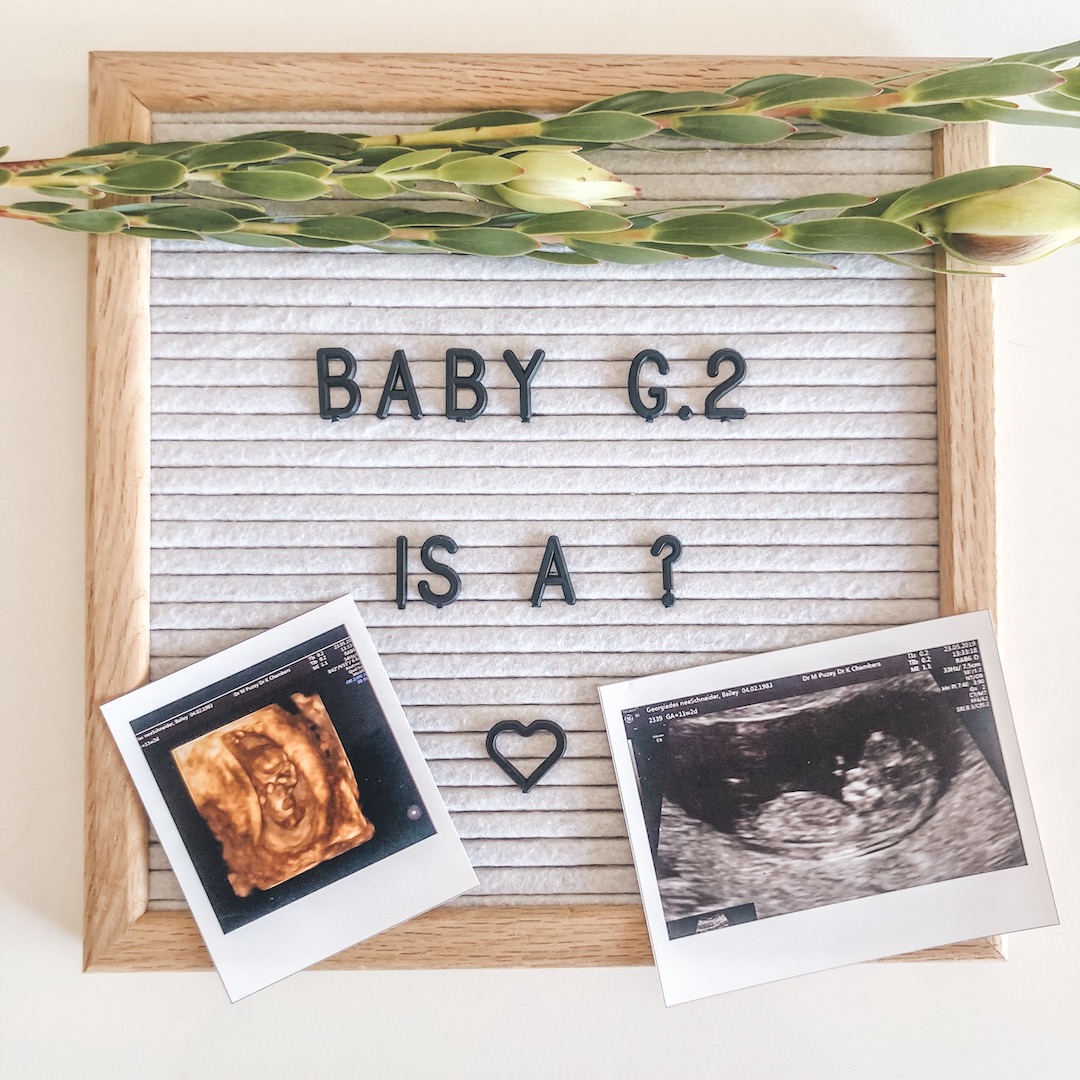 I feel relieved now that the news is out, so that people can get their comments out of the way. There have been countless and I’ve had to bite my tongue several times.

Oh shame, you’re really missing out not having a girl. You’ll have to have another.

How disappointing. I was really hoping it would be a girl, but a boy will do.

I really thought someone like you would have a girl. I feel sorry for you that you won’t experience that. Maybe #3 hey?

I truly understand that the comments aren’t malicious. I think it’s just another example of how people share their opinions without giving much thought about what their opinions could mean or trigger. It falls into the same category of loaded Q’s and comments like: “So when are you having kids?”

I don’t want to come across as defensive, but I do want to say that this baby boy is wanted, prayed for and loved so fiercely and we cannot wait for him to complete our family at the end of the year!

I truly believe you get what you’re meant to and I now understand that being a Boy Mom, is such a privilege. I feel immensely proud and I take pride and great responsibility in wanting to raise respectful gentlemen.

If you are experiencing gender disappointment, I’m sorry and it’s OK. It is OK to mourn the “loss” of an idea you had, so try not to feel guilty. It doesn’t mean you’re going to love that baby any less. Be kind to yourself.