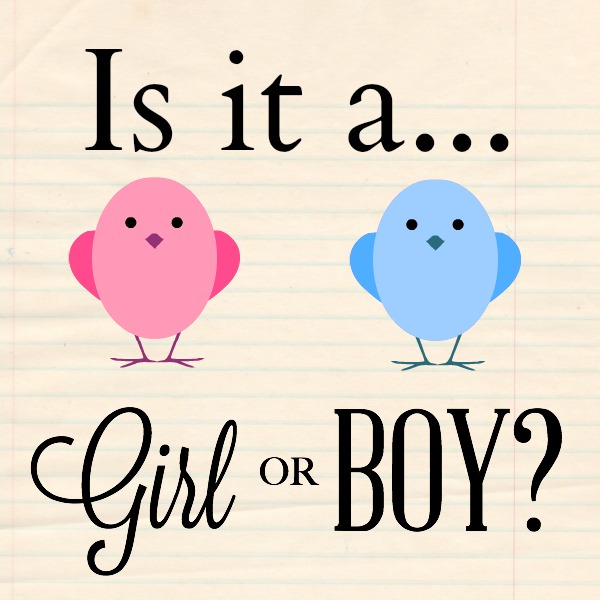 I know many of you already know thanks to social media, but thanks to the new and highly annoying social media algorithms, so many actually missed the announcement. I also want to document it here, on my digital journal.

When Sox and I found out I was pregnant, besides all the emotions and excitement, within a few weeks, we both kept saying: I wonder what it will be? We laughed that we have a 50/50 chance of being right.

We decided we wanted to find out the sex when we could. We see it like this: It’s still a surprise whether it’s at the 3 month mark, or 6/7 months later. I respect those who decide to wait the full stretch (excuse the pun), but I’m too impatient! I also didn’t want to keep referring to him/her as it.

We went for our big scan, on the 22 December 2016  – the 12 week one where they check for certain abnormalities and if you’re lucky, you can tell the sex. It’s not guaranteed that you will, because it is a little soon and sometimes friends have been told it’s the one sex, to find out weeks later it’s a different sex.

We asked my Gynae to only tell us if he was absolutely 1000% certain.

I did something I haven’t done in ages – I ate a chocolate for breakfast (OK not really for breakfast) before the scan, so that baby would move and we would be able to see more in the scan.

I was really anxious to find out that everything was OK and healthy. Finding out the sex would be an added bonus.

Baby G was all healthy and I wanted to cry out of relief! OK I did have a little happy sob. Then it came down to the sex and Baby G didn’t want us to know. It kept crossing it’s leg, or turning and our Dr couldn’t get a proper reading. He eventually said that if we had to hold a gun to his head, he’d say 55% chance girl, BUT it was still too close to the 50/50 mark and we would have to wait another few weeks for absolute certainty.

My gut feel was: BOY.

We asked all our friends and family for their predictions and we had a pretty close split, with GIRL coming out on top.

On the 5th of January I landed up in hospital for a night. I was put on a drip. I had such a bad migraine that was making me throw up. I tried taking Panado, but I couldn’t keep it down. I couldn’t keep a single sip of water down never mind food, and eventually after feeling weak and like my head was going to explode, I called my Gynae who told me to get myself to the hospital immediately.

I honestly thought that I would go onto a drip for a few hours and then go home, so I didn’t even think to pack a bag. Sox was working and I sent him a message telling him the situation and telling him not to worry.

He came screeching into the hospital where he found me in a hospital bed, strapped up to a drip, which had been a mission to put in, because my veins were so dehydrated. Even though I was feeling very sorry for myself; it’s amazing how I didn’t actually care how awful and sore I was feeling. I just wanted to know that Baby G was OK. All my vitals were fine, so they weren’t too worried about baby. I stayed the night and in the morning, we had a scan to check that it was still fine.

Sox and I looked at each other and we just said: YES PLEASE!

I just started laughing and Sox and I were so excited, but it was also a surreal moment. 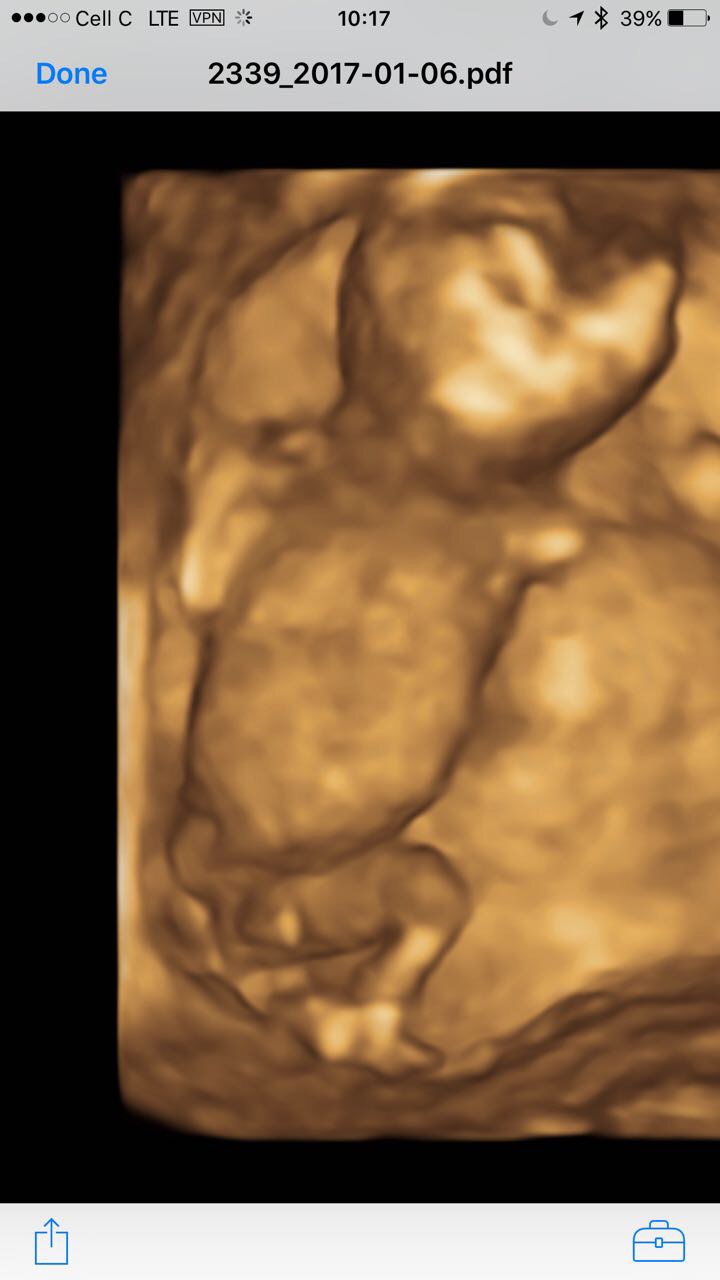 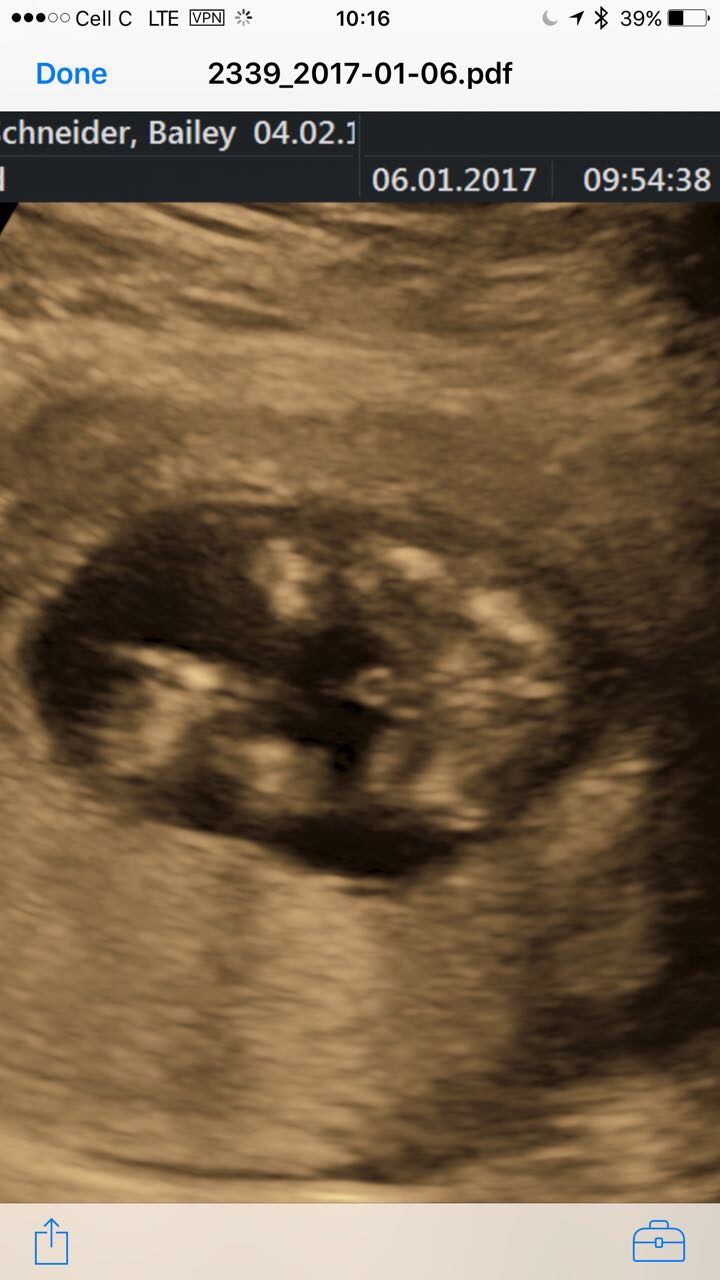 When I sent the above pic to my sister, I was trying to explain the view. Imagine he is sitting on a glass table and you’re looking up, underneath him… You can see his legs in a sitting position and the boy bits in the middle. She still wasn’t convinced, so I drew it. We still laugh about this… 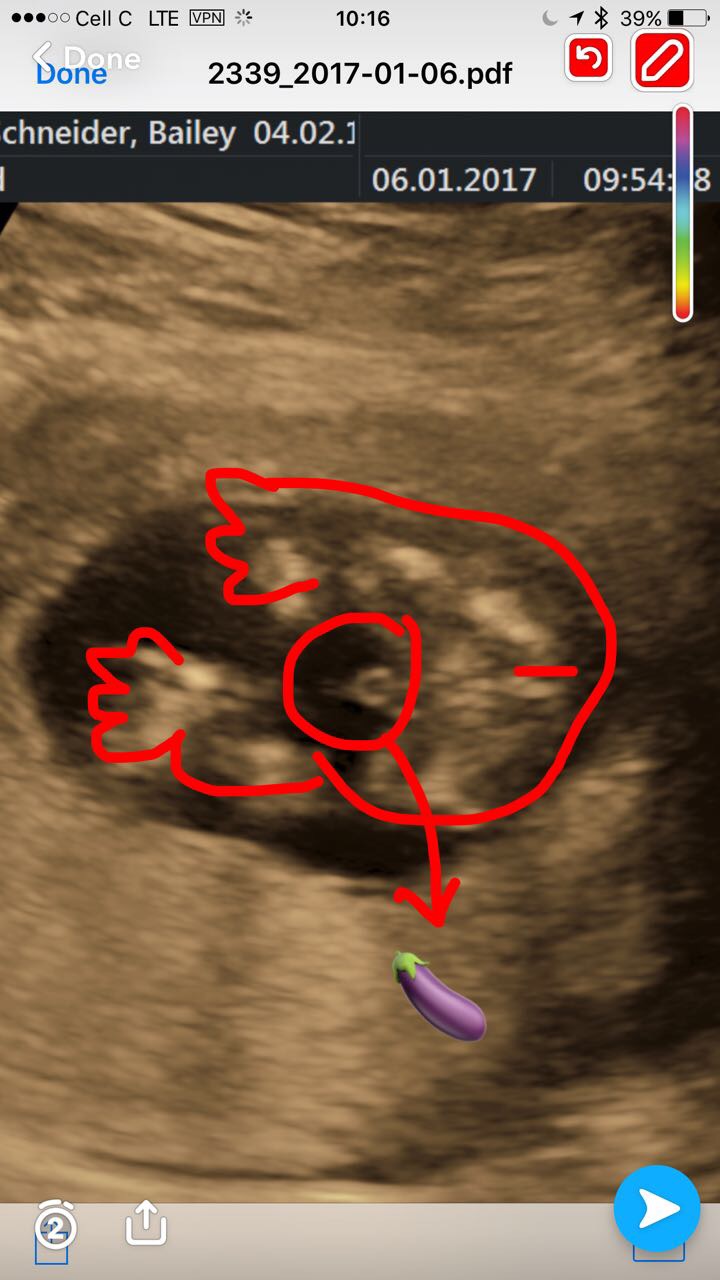 Afterwards, we had a quiet moment to let the news sink in. This is going to sound nuts – BUT, it’s honest.

Sox and I had a teeny tiny moment of disappointment that it wasn’t a girl. I know that sounds bizarre, but when so many people have said girl, you start to imagine that little person… That moment lasted very, very briefly and we both started bursting with all the excitement. It was my gut feel from the very beginning and Sox has always wanted a little boy, but the disappointment, made him realize that he would have been so happy with either. I think it’s a natural reaction that you have, the moment you find out it’s the one and not the other.

Sox was so excited that he asked one of our designer friends, Georgina Spiliopoulos to design our announcement. He’s a MASSIVE Manchester United and they always announce the new team with jerseys in the change room, so we announced it this way: 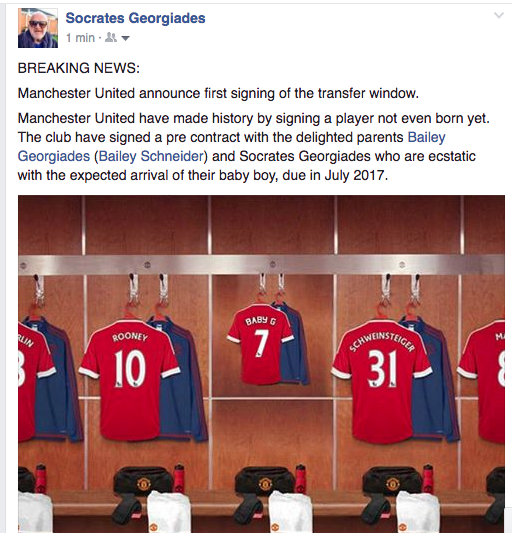 For Sox’s birthday, our very good friend Rhodri, who works with the Ryan Giggs, made this and Giggs signed: To Baby G, Utd’s Latest Signing and his signature. 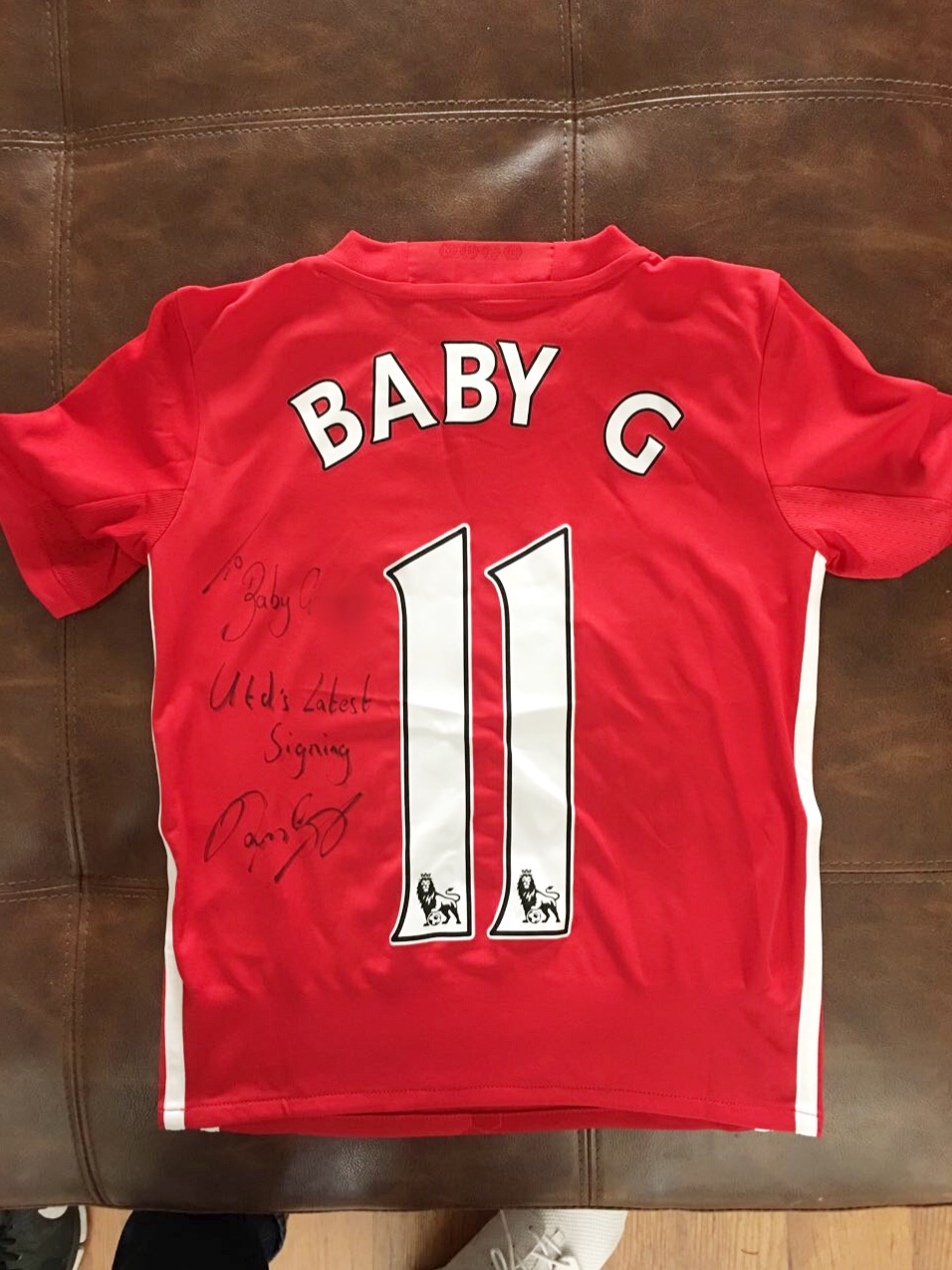 So there we go. Baby G is a BABY BOY and I cannot wait to meet him. I must say, I feel nervous having a boy. Sox’s family is just all boys. This will be the 5th grandchild for Dimitra – all boys!

I, however, come from a family of all girls, and my Dad! My Dad used to joke that he was surrounded by females (even growing up, our pets were girls, except for Duke now) and he was pretty sure all the ants and butterflies in the garden were female too. This is the first grandchild for our family.

I know what to do with girls –  bake, braid hair, play tea parties and dolls etc… after all, I’m such a girly girl. What do I do with a boy? Not that we can’t bake and have tea parties etc…(I can just imagine some of the gender comments coming in now – please don’t)  but I’m going to have to learn how to kick soccer balls, build structures, play dinosaurs and superheroes and get muddy! Actually, as I type that, I have this glow of excitement. I cannot wait!! 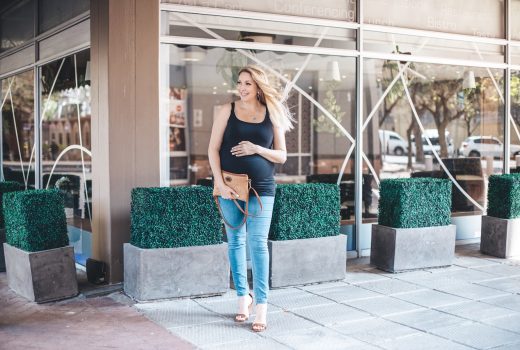 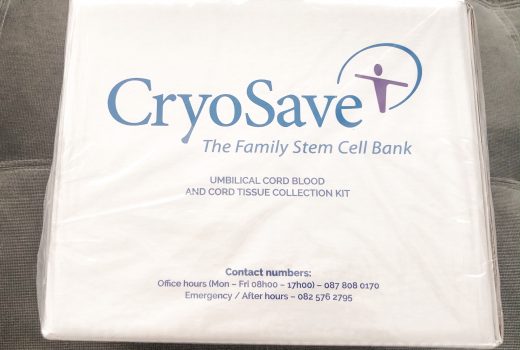 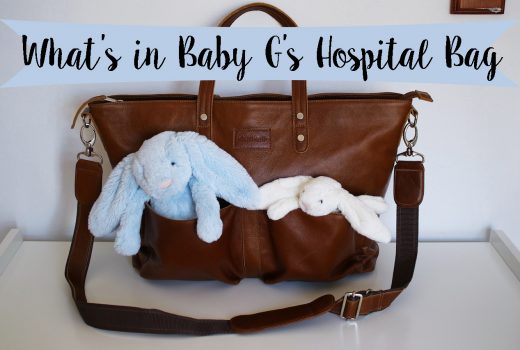