At 6 am last Sunday morning, I bet you were still sleeping.

I, however, was a big ball of nervous energy and butterflies as I headed to Stellenbosch with Paul and Concetta Rothschild. We were taking part in the Impi Challenge as Team SWEAT 1000.

I wrote all about Facing Fears and little did I know how many would be challenged.

I joined the team without really knowing what I was getting myself into. I knew it was going to be 12kms and I knew there were some obstacles, but I did not know how physically tough it would be and I don’t think I would have said “Sure! Why not?” if I had known.

We met up with our large team, looking clean in our crisp white tank tops, our black war paint on our cheeks, our pink bands with our race numbers and an excited/anxious energy in the air. 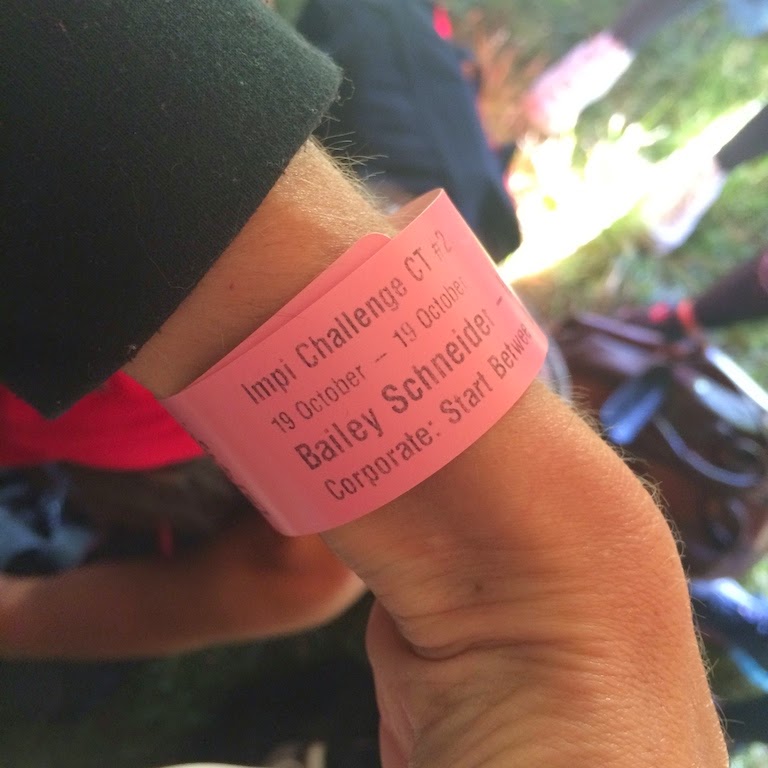 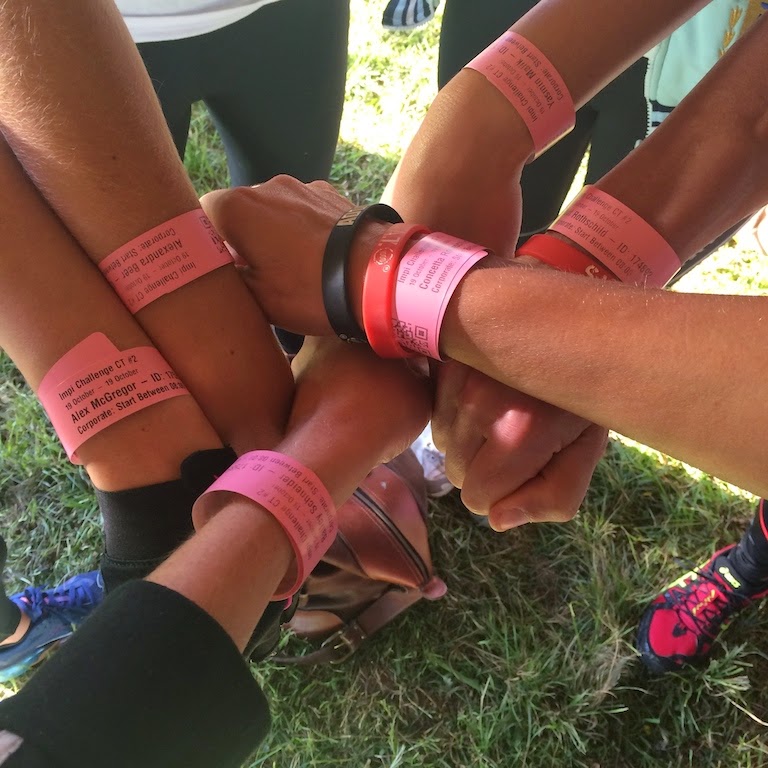 We took selfies and group pictures and I kept willing my heart to beat normally and kept breathing deeply. As we got closer to our start time, the reality of what I was about to embark on started dawning on me. What the hell had I got myself into and what could I expect out there? There was only one way to find out and I was really scared. I’ve got an anxious fear about competitions, which stems from my childhood (you would have read more about this in my blog post, link mentioned above.) 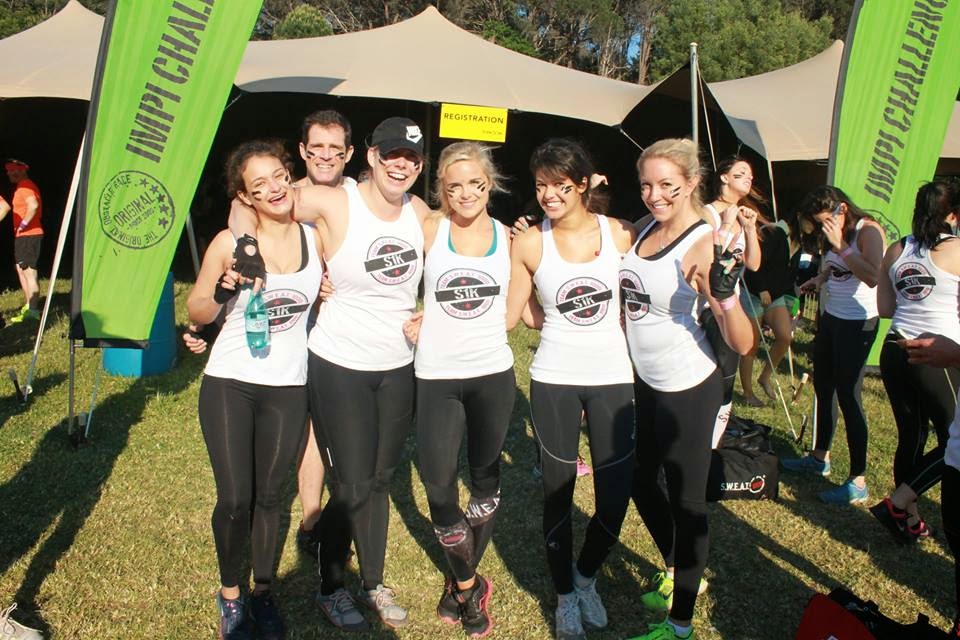 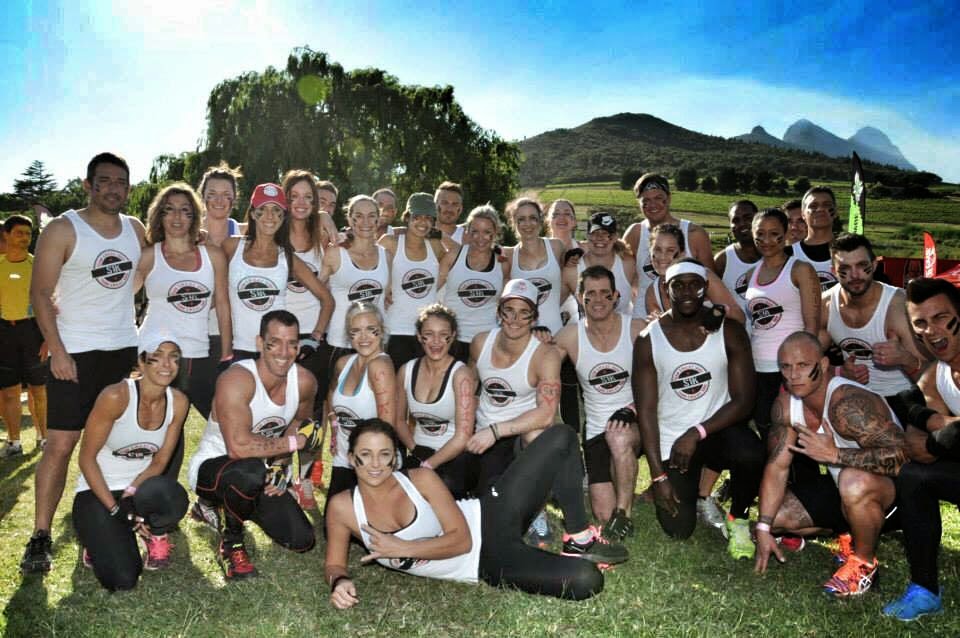 It was finally our time division and we headed to the start. Guy McDonald was the entertaining MC and he got us laughing, which helped the nerves. However, the nerves came back when he said, very excitedly: “And… We have decided to give you an extra 1 and a half kilometres free, over and above the 12kms you were originally set out to do. That’s right! The course is now 13, 5kms!!!”

There were some enthusiastic whoops and cheers around me and I just looked on in horror thinking: “Wait, what?!? No, no no! You can keep your extra km and a half. Thank you very much!”

I’d be whooping and cheering if he had mentioned one and a half km’s were being deducted. 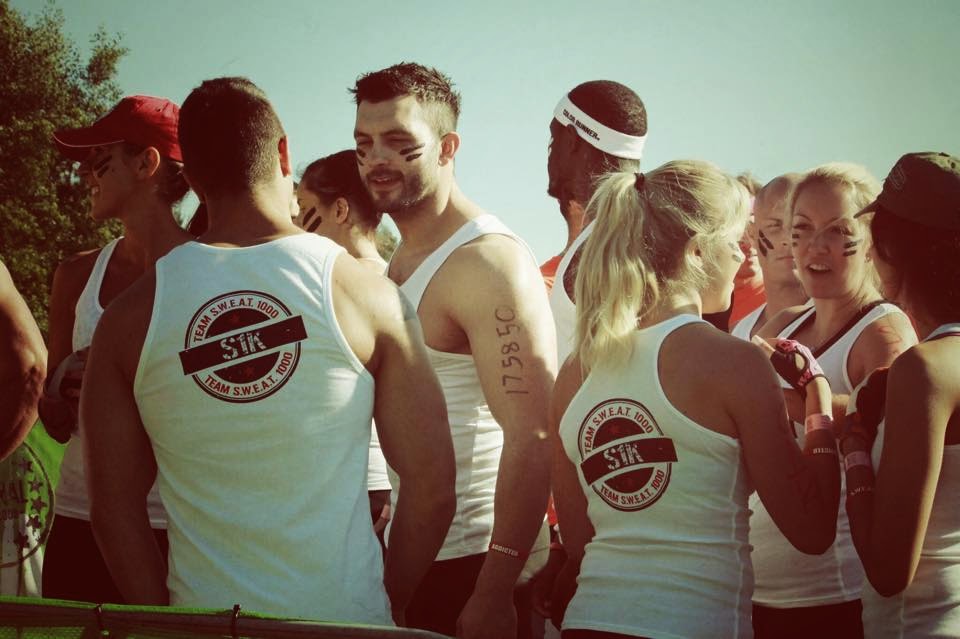 The horn blew, Concetta grabbed my hand, which helped more than you could ever realise. I was so nervous I thought I might throw up, but off we ran. Uphill to start. I should have known right then how tough it was going to be. The uphills never really stopped. 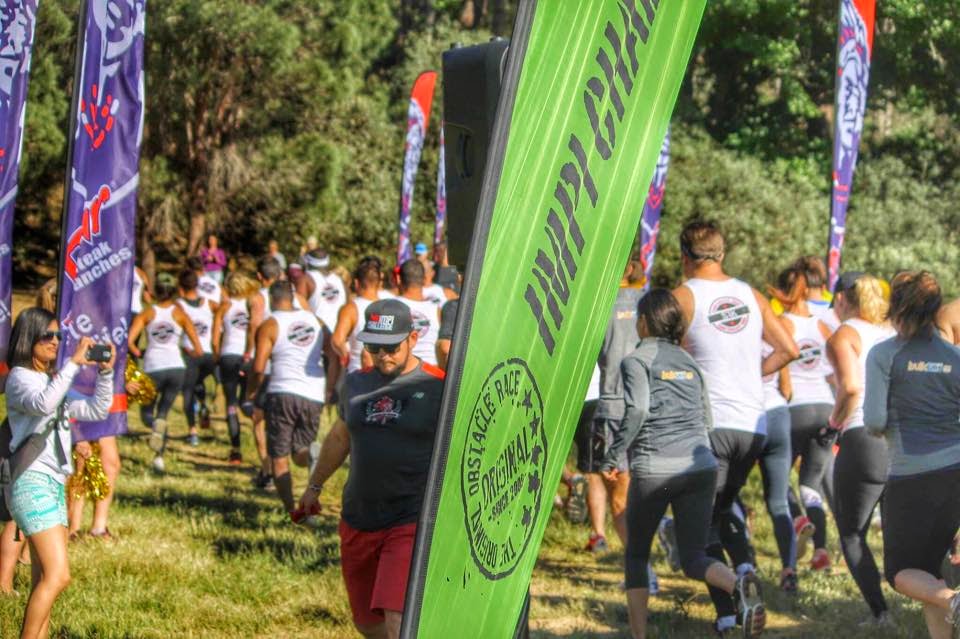 We entered The Spur Snake which was trail running up a leg-burning-incline hill and down a hill in a snake formation 8x over. Legs were basically dead after that and it was just the start! 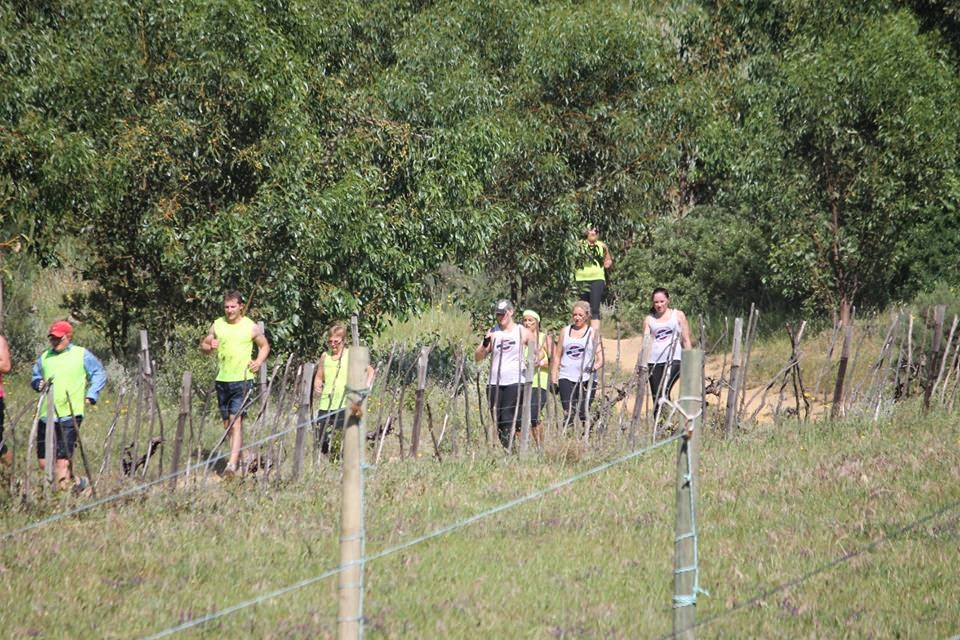 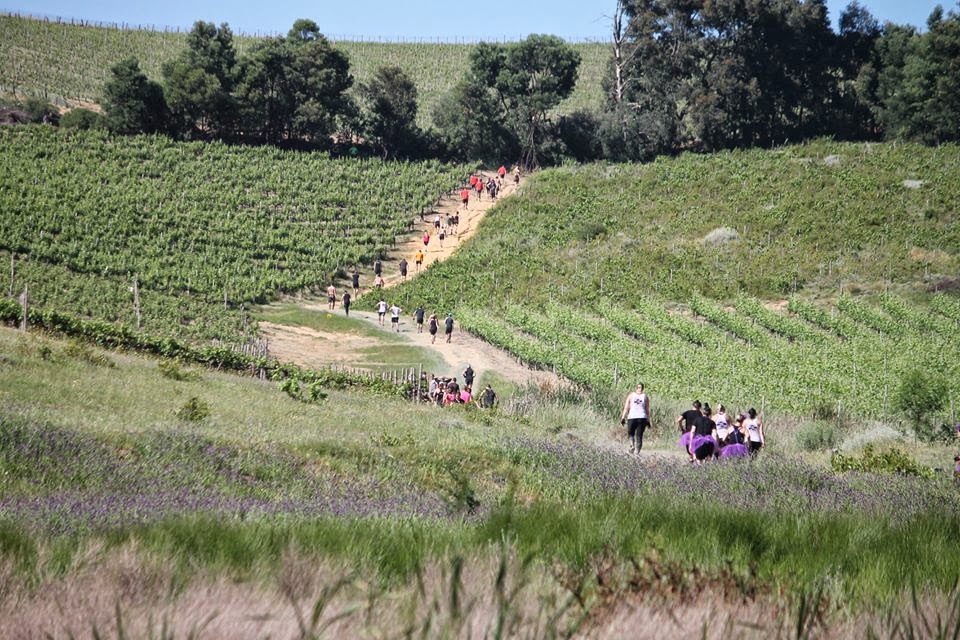 We went over and under rocks and trees, swam across dams, came to the Rawson wall – not one, but two of these 2m high walls. We had to get over how ever we could. Thank God for Paul and Gareth who helped lift us up. We then had to reach for the top and pull ourselves up.

I was expecting stairs down.

I didn’t realise it was exactly the same on either side. It was so scary trying to lower myself down and then jump… my legs and arms were shaking and we had to do it twice. Twice.

There were more steep hills with rocky terrain and forrest to run up and honestly, only a few downhills and straight places. I swear those hills were never-ending. Burn to the max. 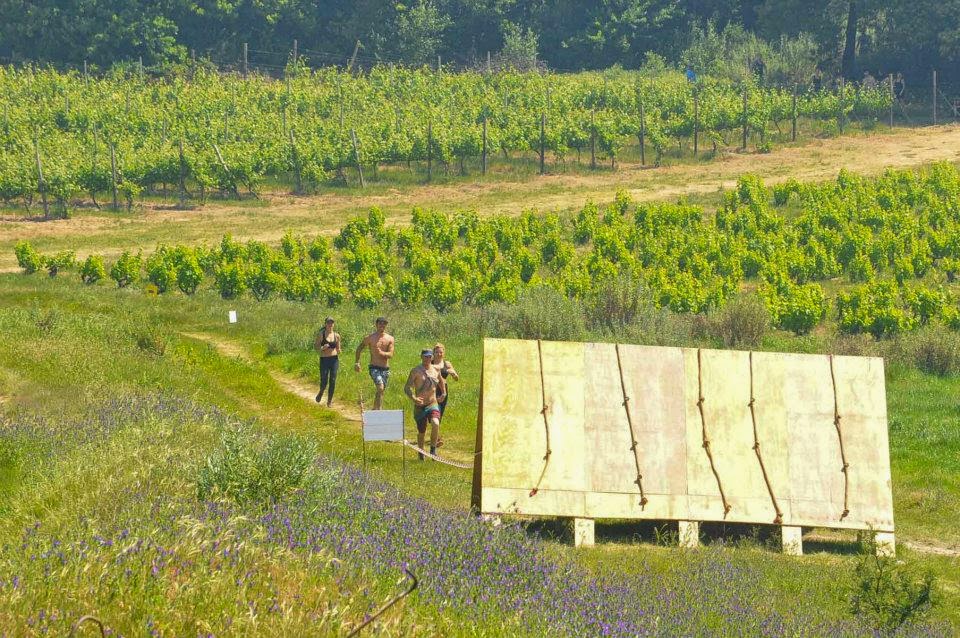 Our team got a little broken up and some of our more advanced athletes shot forward, but there wasn’t anyone from Team Sweat 1000 who was alone. Tammy, Lauren, David and I ended up sticking together, egging each other on, holding hands, helping one another over and under and through the obstacles and we called ourselves the “Awesome Foursome.”

Running/walking on this terrain on the trail had it’s own set of obstacles and we had to be so careful on placing our feet and stabilising our ankles.

We waded through several stinky mud pits that were either ankle deep, waist deep or shoulder deep.

We crawled through narrow dark (eeek) tunnels – I actually panicked and felt quite claustrophobic. My elbows were scratched as I tried to pull myself through and even though I could see the light at the end of the tunnel, I screamed for my team mate, Lauren to pop her face there. She helped me with her kind words of encouragement as I pushed through, my elbows and arms burning, until she could eventually reach me and pull me out. It was more hectic than it looked.

There was more mud.

Leopard crawling through mud under low barb wire was actually fun. My elbows were grazed from the tunnel and I didn’t want to hurt them even more, so I rolled through. It worked, even if my braid got snagged a few times in the barb wire.

We swam across another dam, went through monkey bars, over ramps (harder than it sounds), wobbling planks, and those bloody hills did not stop.

I don’t think I have said the word F@&# as much as I did on this course. We would get to the top of the hill, feeling victorious only to discover a new hill waiting for you around the bend. Relentless.

The first water point felt like a million miles away and I really could have done with one a little sooner than had been planned out.

I hadn’t been taking note of the obstacle numbers – I was more concerned about what we had to do, so I wasn’t keeping track. At one point I was absolutely convinced we must be done, with only 1 or 2 kms to go. As we were running through to the next obstacle, I asked a marshall how far we had to go and he replied: “You don’t want to know!”

More swearing like a sailor occurred and I am convinced my muscles have an even filthier “mind”, they were screaming at me.

I don’t know how I managed it, but I did and I am beyond proud of myself (if I say so myself.)

As I waded under mesh wire through shoulder height mud, I knew we were close. 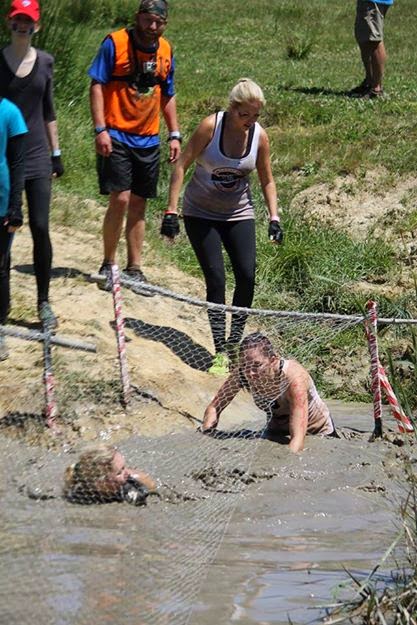 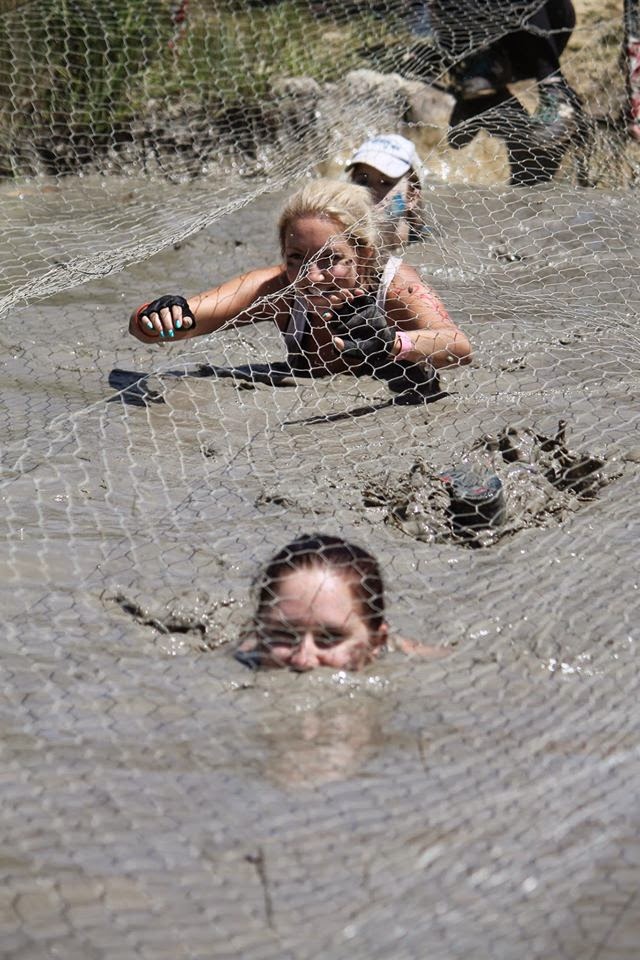 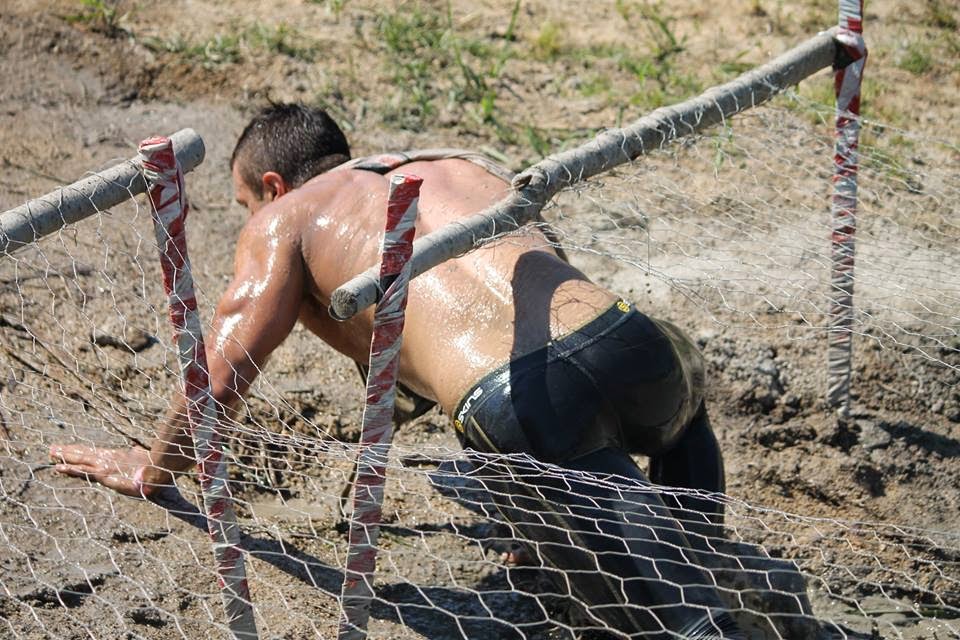 When we came around the bend and saw the final obstacle of the lily pads, I knew I was home free. The lily pads are wooden planks across the dam. You have to land right and keep running fast or you’ll sink/ fall in. I could see some of my Sweat 1000 team on the other side of the dam and heard them screaming my name in support. It was a glorious feeling and I ran across those lily pads and punched my arms up into the air in complete victory. 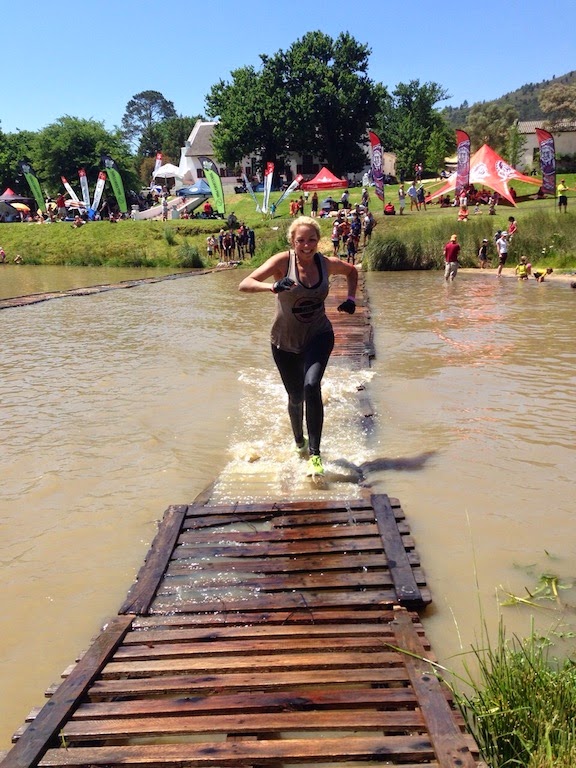 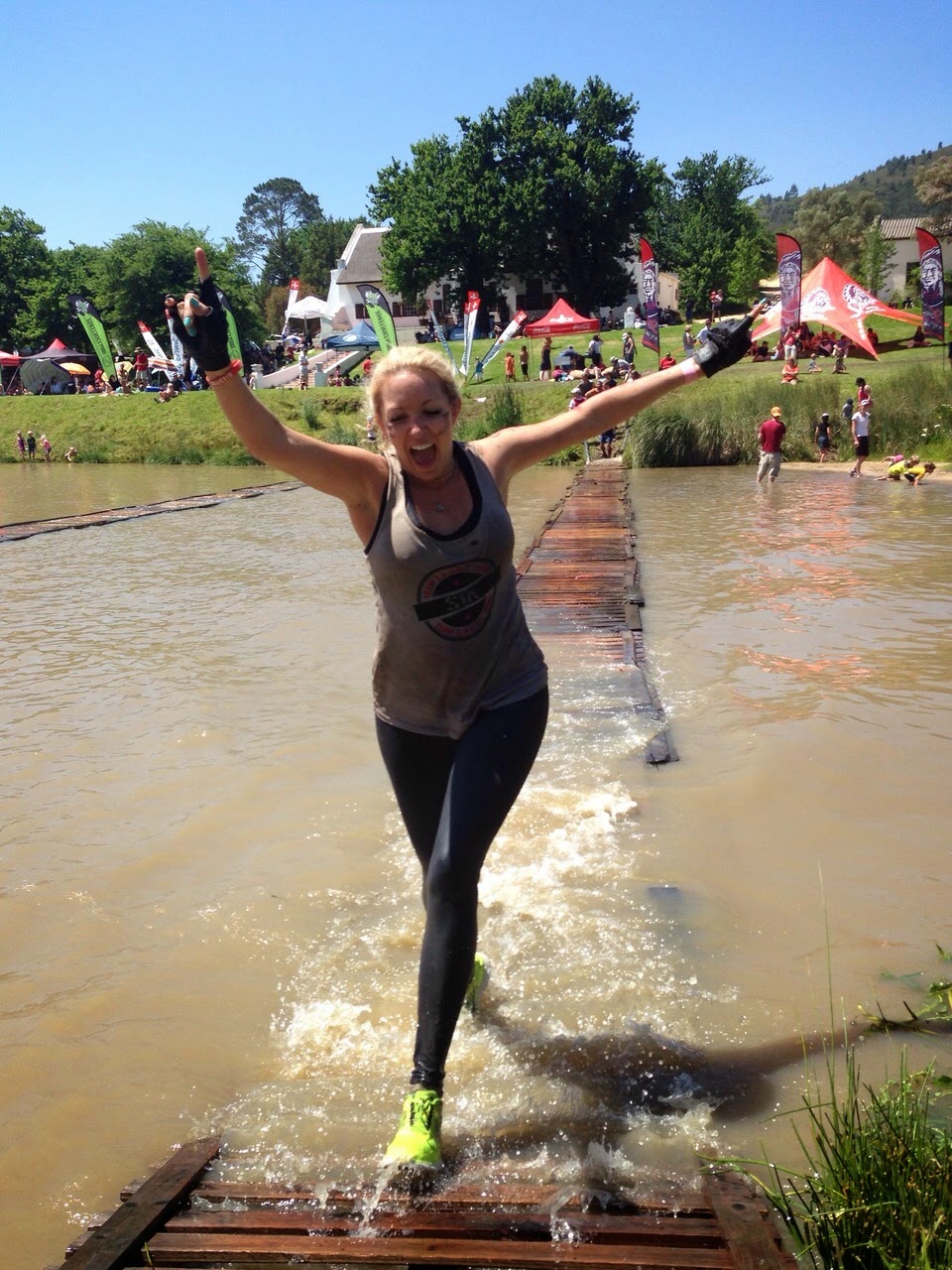 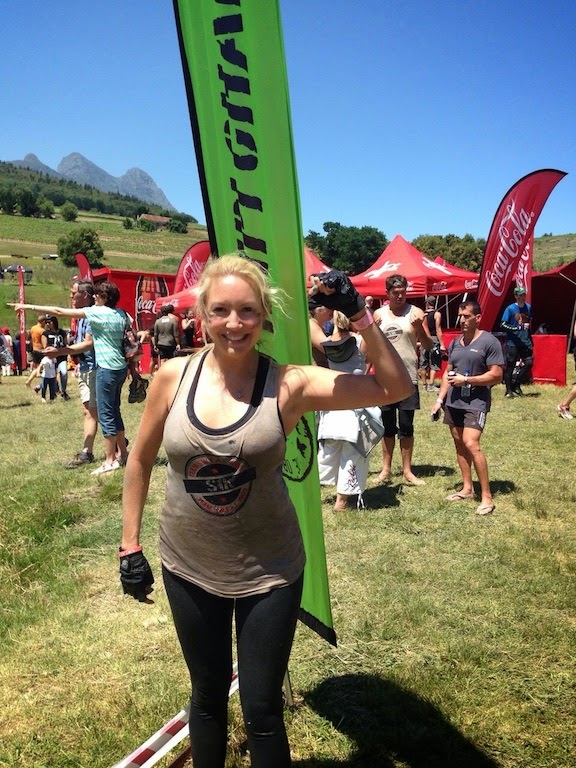 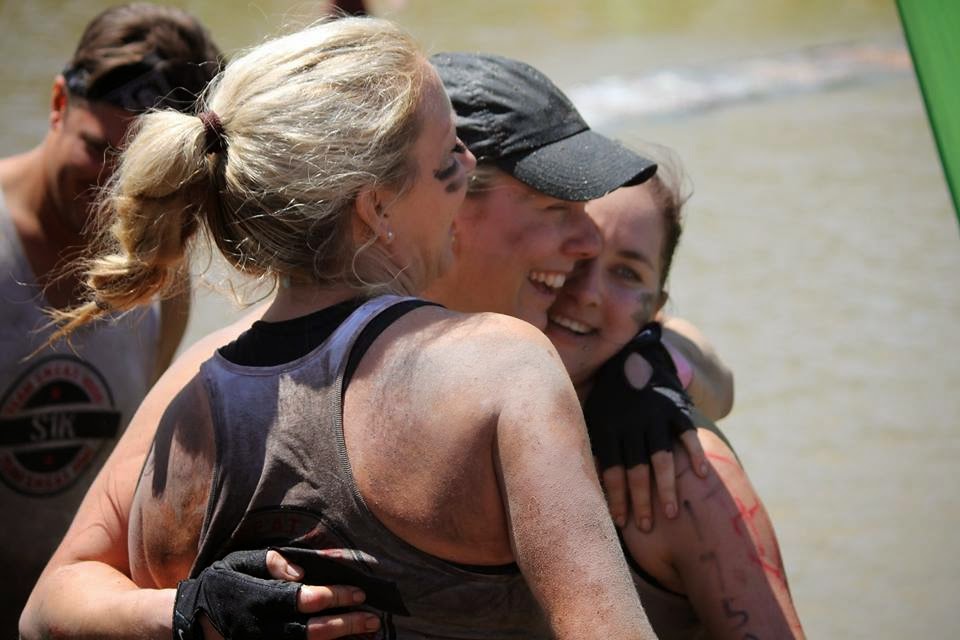 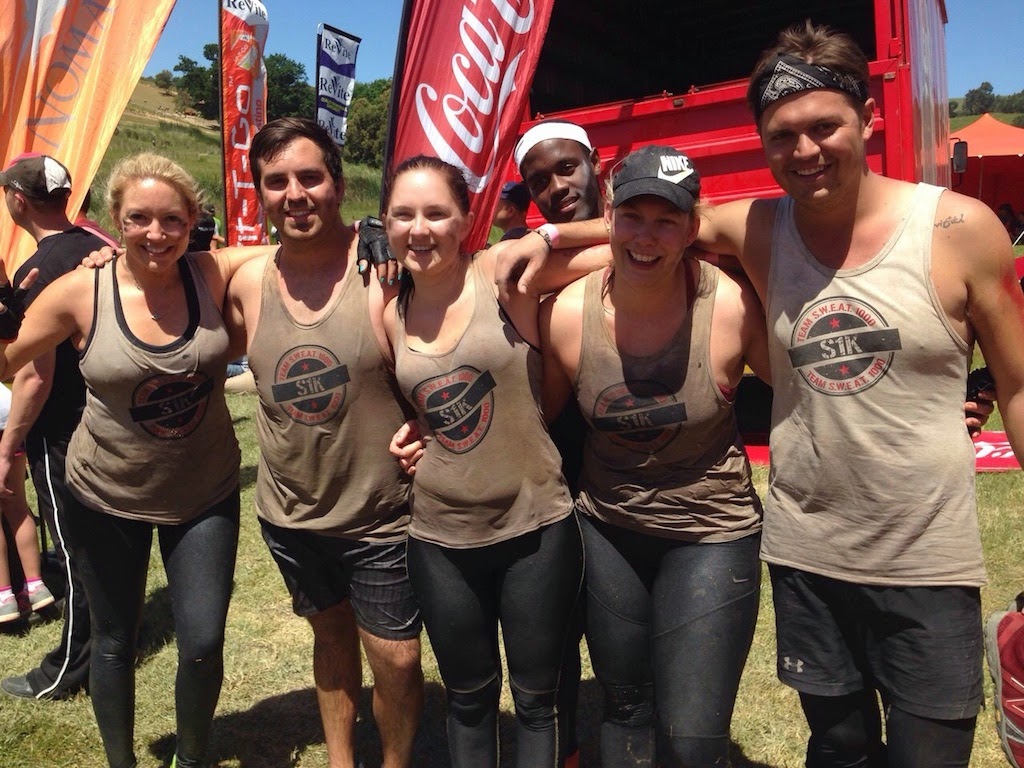 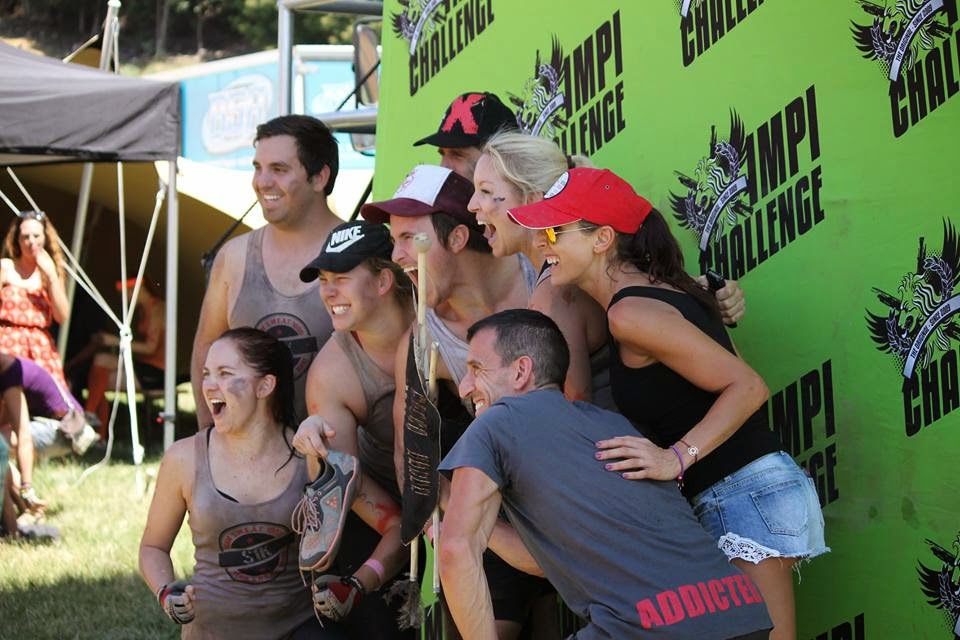 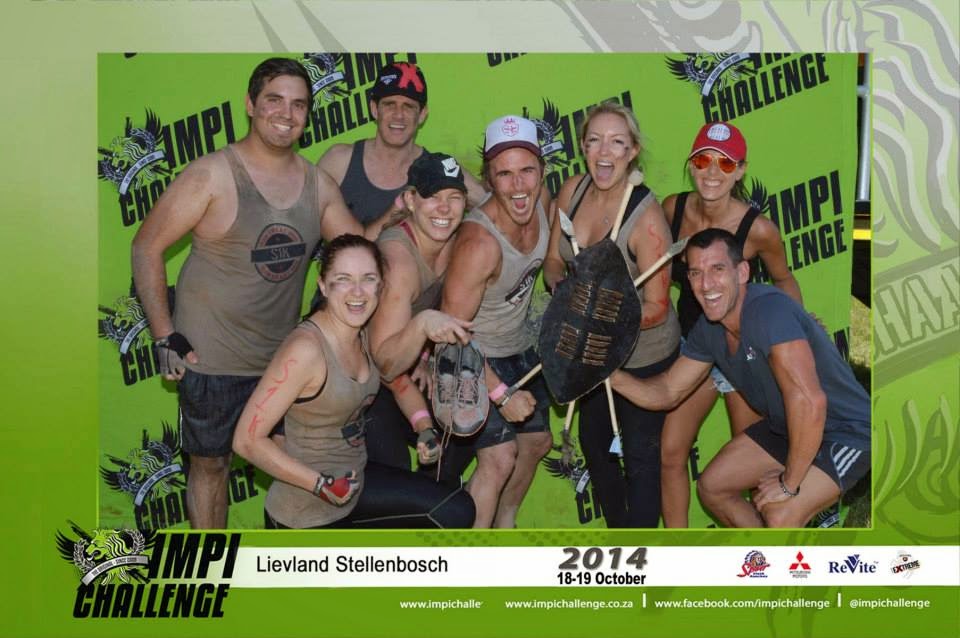 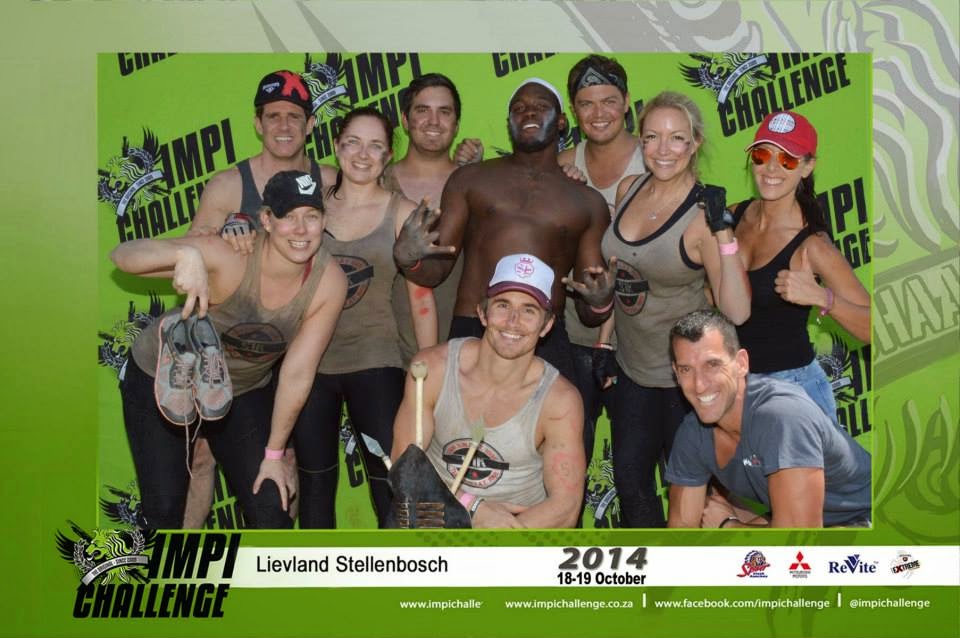 Today I cannot walk. OK I can, but I am slow and look like a little old lady. I am bruised and scraped but I’m on a high because I surprised myself of my own capabilities – physically and mentally. 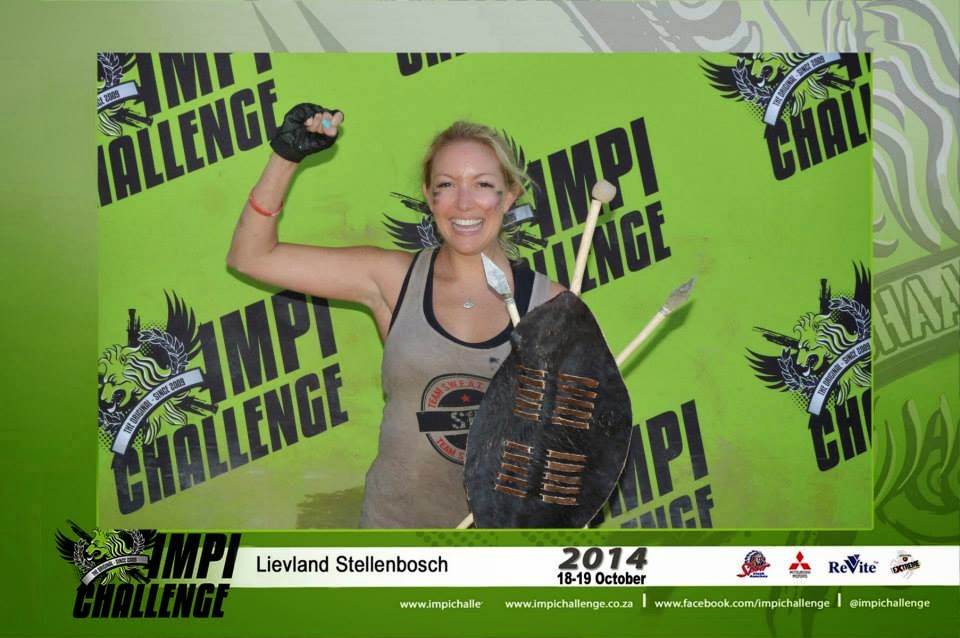 Thank you so much to my team mates at Sweat 1000 for the incredible support and motivation! What a team! Well done to Bjorn Steinbach for winning our time division and representing – you are a beast! The awesome foursome, Tammy, David and Lauren – you guys were my rocks and I couldn’t have done it without you!

Paul, Gareth, Frank, Concetta, Alex JB and Alex McGregor, you are all amazing!