I am a huge animal lover. I always have been. At the age of 4 I was given a gorgeous black and white kitten. I called her Kylie – after Kylie Minogue (I loved her from that early age) and she lived a long life… 16 years in fact.

In between that, I grew up with St. Bernards and Golden Retrievers.

I am certainly a large dog lover. I think little dogs are cute, but not so much for me… I’m so worried I’ll stand on them. Anything that can fit into a handbag should not be around me. I’m always worried that I’ll turn them into a doggy kebab with my stilettos. Aaaah… the stress of that alone freaks me out.

In 2007 I bought a beautiful blonde Labrador puppy. I called her Summer because she was that white blonde colour. She was about 2/3 months old when she became really sick. I thought she had perhaps eaten something out of her ever growing curiosity with the world, but she didn’t get any better. That night I took her to the vet. I was told she had Parvo Virus and wouldn’t make it. I was completely grief stricken. My animals become my children and the vet was gently telling me that she had a 20% chance of making it.

The antibiotics she needed were incredibly expensive but I looked at this bundle of blonde fluff, she licked my hand and I knew I had to make the decision to save her. Each day the vet would phone to tell me what the bill was sitting on. Each day it was growing more and more out of my budget, but as long as she was responding, I was happy. I would worry about the money later. I was only allowed to visit her during visiting hours and I diligently did that every day. I would sit on the floor with her, praying and stroking her and telling her it was all going to be OK. She was in puppy ICU for 10 days – just lying there – she had no strength to even lift her head, but when I walked into the room she always tried to wag her tail – even though it was more like a twitch.

R15 000 later, my puppy bounced out of there a picture of perfect health. The vet was so amazing and kind in taking care of her, but they also gave me a discount saying that no one had ever tried to save their puppy the way I had and no one actually expected her to live. I took out a loan to pay for the bill, but it was worth it.

As she grew stronger and better, the one thing I noticed in particular was how intelligent she was. She knew how to open electric windows in the car, by watching me (once); she would carry my shopping parcels delicately, she could open doors… she was remarkable. A dog with that intelligence needs 24/7 stimulation. My work schedule just did not allow for that. A friend of mine, Ingrid, suggested something to me. At first I thought the idea was absurd, but I started to explore the option. I always thought they only accepted 6 week puppies, not 6 month old puppies. I called the association and they came to the house to “test” her and gave me their opinion. They said she was and I quote: “Born to be a Guide Dog” and if I was willing, they would happily take her on and train her up.

It was the most bitter sweet decision I’ve ever made. I cried my heart out the day they came to collect her, but my gut was telling me I was doing the right thing for her.

A year later, she graduated as a Guide Dog. I was invited to her graduation and I watched in awe as she helped her new blind owner cross the street, manoeuvre him around obstacles like dustbins and people.

She looked so grown up and yet she was still small in comparison to the other dogs. 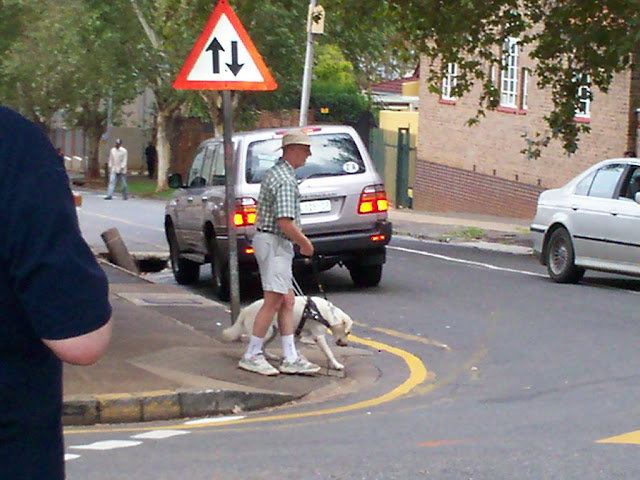 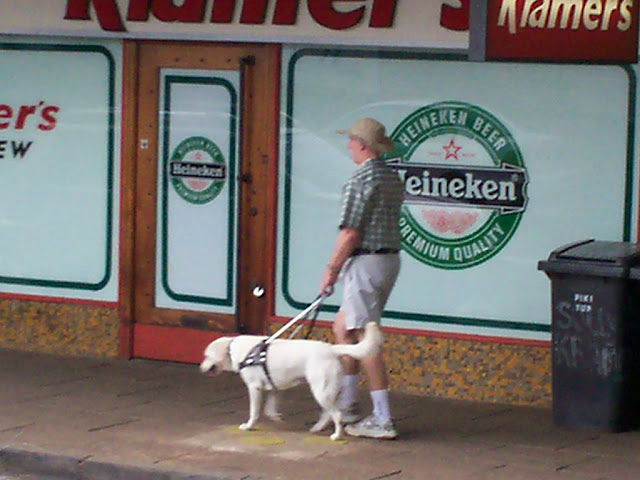 Afterwards we all gathered for a tea.

I wondered if she would recognize me at all. My answer came in a leaping jump. She came running from the other direction through the table of cakes and tea, through the people and jumped straight into my lap. She licked my hands and my face and gave me a bark. I cried and cried because I knew I had done the right thing. I had saved her life so that she could go on to save and help others. 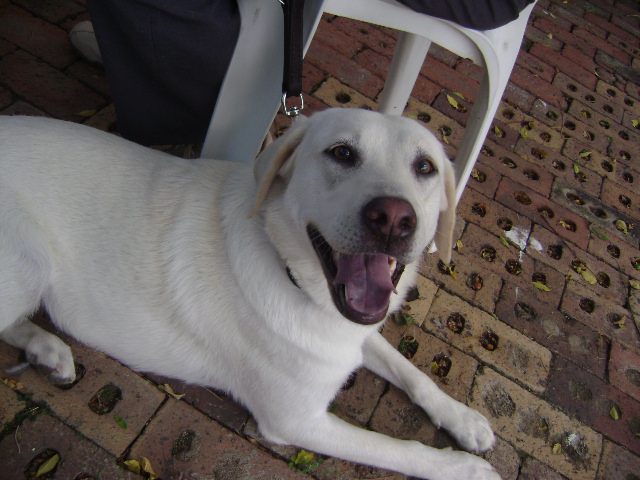 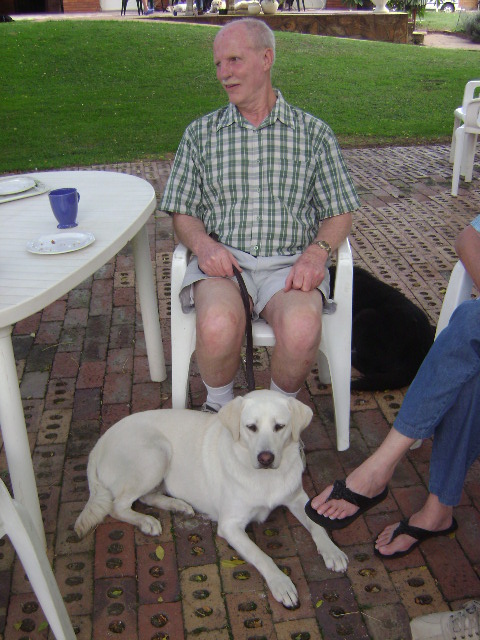 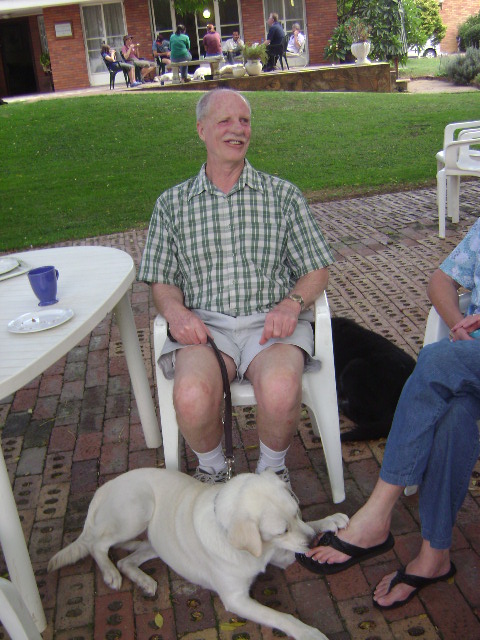 I met her new owner, Bennie. His mom had had German Measles when she was pregnant with him and he was born blind. He felt my face and then asked me to describe what Summer looked like. I started to explain that she wasn’t a golden blonde, she was a white blonde, that she had long eye lashes, a bright pink tongue with 2 black spots on it and then I stopped. I was describing colour to a man who had never seen colour. I didn’t know how to describe her. He knew that and all he said was: “She sounds as beautiful as you are.”

He gave me a photo frame to remind me of them: 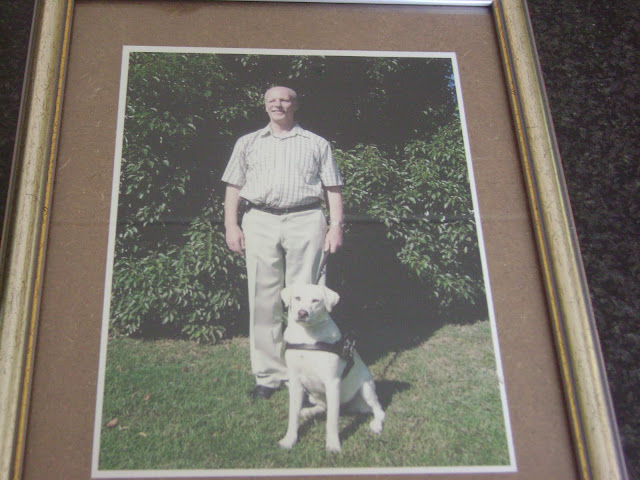 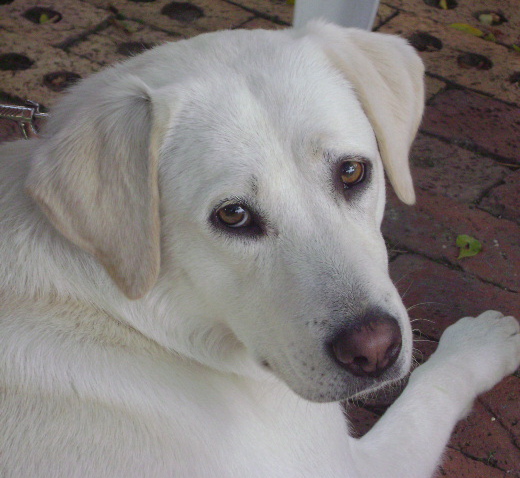 It’s been 3 years and I miss her every single day.