I’ve had an Alanis moment in irony … the busier I am, the more I get done. Still … the past week has been a whirlwind of emotions, stress, anxiousness, excitement, self-doubt, self-confidence and I’m wondering if I am officially losing my marbles. Well maybe only some of them.

I didn’t expect a certain piece of news that I BURSTING AT THE SEAMS to tell – and can’t. Yet.

So while, trying to prepare for that … I have a million other things going on too.

I am organizing Karolina’s Surprise Birthday party and I am too excited. I somehow need to figure out how to get her out of her home, since we’re doing it there. Her husband has been nothing short of awesome and the two of us have spoken over email, blackberry messenger and on actual phone calls more than K and I … and that is A LOT!

The dress code is a Touch of Red and somehow I need to figure out how to fit 100 helium filled balloons (or perhaps I should get 99 Red Balloons … Sorry. Music humour) into my car. I’ve arranged caterers to come through … cooking for 50 people is um … something I won’t even think to attempt. We’re having a yummy spit braai with the various salads, side servings and the most incredible desserts too. 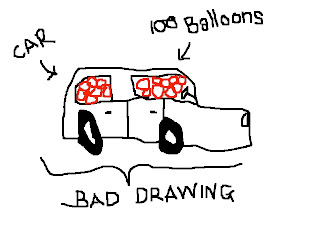 I’ve been mixing together a series of playlists … for when people arrive and for when the party gets started. I know exactly which songs she likes so it hasn’t been difficult … it’s only iTunes that has been making me need Botox sooner than necessary. Good Grief. Just as I finish the playlists … CRASH. It’s OK once … not five times.

So very excited to actually coordinate this entire soiree, but also anxious about my preparations that need to be done.

In other news, I went to my first spinning class this morning. I love spinning, I used to spin all the time and fell off the bike wagon in that department. I go to gym, but haven’t done a spinning class in over a year! Eeek. Since I have signed up to do the 94.7 Momentum Cycle Challenge – I just went pale – I guess I can procrastinate as much as I like, but the 21st of November is coming whether I like it or not.

I probably shouldn’t have started in one of the hardest classes … that lasted 60 minutes. I looked like someone had thrown me into the swimming pool in my gym gear. Not pretty. Especially when you see the hotness that happens to train at that time. Great.

Tomorrow’s party is going to be interesting. I think I will stand on the dance floor and just kind of sway. Perhaps it will start a new trend, like the Macarena. No. I didn’t think so either.

I think it is safe to post right now, because K is out with some Polish mates and will not be near a computer. But then again, Irony has seemed to hang around me lately … so who knows?

“Do what you love…