I AM VERY EXCITED ABOUT MY FIRST GIVEAWAY… Keep reading!

Music feeds my soul. There is very little music that I don’t like and I really appreciate and respect the people in the music industry.

One of the most incredibly talented guys I know happens to work with me and happens to be a dear friend. Let me introduce you to Gavin Deysel … some of you will know him as Vin Deysel thanks to the 94.7 Breakfast show.

I love his passion for music, his brilliant ear for beats, tunes and mixes and he is a really fun loving, good guy.

I love entertaining and dancing – and whenever I put on his CD’s; I can’t help dancing, head bobbing, foot tapping, finger drumming…Yes, you get the idea!  His latest album is just A.W.E.S.O.M.E

The man is so busy but I managed to get him to do a Q+A for us… Thank you Gav!

What made you get into mixing and music?

I have always loved music! When I was a baby/toddler the only way my family could keep me quiet  was to put a pair a headphones on me an turn up the volume! 🙂

My brother had a “Mobile Disco” and naturally as I got older I started to go with him and my father, my brother then started to teach me how to mix and when I was 16 my brother was doing club gigs and he used take me with and I used to play a few tunes during his set. 🙂

Why is music your passion?

Music has a way of triggering memories and emotions and when I listen to certain songs It reminds of things I have sometimes forgotten.

And when I’m DJing and the crowd is going crazy to a certain song it shows that no matter how different we are music can bring us all together (as cheesy as that sounds! 🙂

You’re a part of the Breakfast Xpress show on 94.7 and you’re a DJ … what do you prefer? Waking up early for radio or getting home early hours of the morning after a club gig?

I would be lying if I said I enjoyed waking up at 4am… so I think I would say getting home early hours of the morning after a gig. 🙂

What was it like when you were dubbed “Vin Deysel”?

I’ve been called “Gaven, Kevin, Given and more!” so it was actually cool to be called something else! 🙂 Plus people often confuse me with “Vin Diesel” on twitter, so they tell me that I have a great body and they wish they could drive me like me in the Fast & Furious movies! Hahahahaha!!!

What was it like when you held your very first CD in your hands for the first time?

Having my own CD has always been a dream of mine and when I got that first copy of 94 Hits in a Row Volume 1 it felt FLIPPIN AMAZING!!!!!!!  I get the same feeling every time I release an album.  For me, when I mix an album it’s like it’s a part of me, so when I see the finished product I always get a HUGE smile on my face and butterflies in my stomach!!! I LOVE IT!!!

How did CD 2 come about and can we expect many many more?

Well I was really excited when 94 Hits Volume 1 went GOLD, so the logical step was to release Volume 2 and it sold double the sales!

You can definitely expect more… I mix the South African edition of “Ministry of Sound” and I just released my own compilation called “Vin Deysel presents Wiki Mix”  which is 2 discs 60 songs in 6 genre specific “mega mixes” for whatever mood you’re in, and it is available at all leading music stores!

What has been your best and worst club gig you’ve ever done?

I have had so many awesome club gigs and some really dodgy ones! I remember a rather embarrassing club gig in the Vaal, they had a huge promotion with about 10 different DJ’s and I was doing the opening set, the club was full I was playing the tunes people are parting and at the biggest build of the song as the people were shouting and going crazy… I pushed the eject button on the wrong cd player! WOW, now that is every DJ’s worst nightmare!

Do you have any superstitions or rituals that you do before a show?

I go and pee just before my set. 🙂

What’s the next stop for you professionally and personally?

Not sure, but I have some big plans up my sleeve!

No specific piece but I love hoodies

“What do you get hanging from lemon trees?” Sore arms! HAHAHAHA!!!!

Quickfire: Answer which one you prefer: 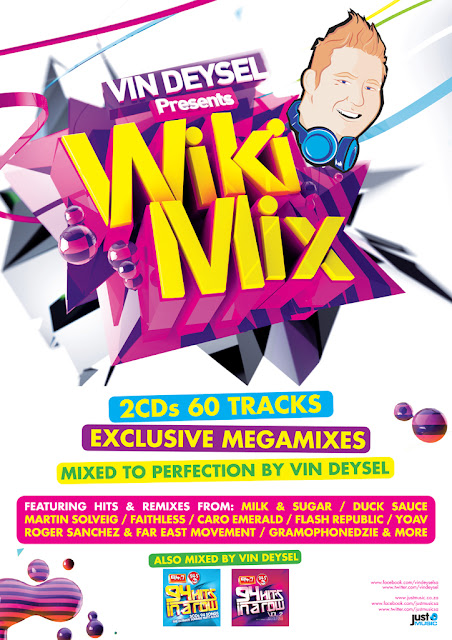 GUESS WHAT?? All that eyelash fluttering worked… (OK it didn’t – I looked like I was having a fit – not attractive) and Gavin has very kindly offered me 2 of his autographed Wiki Mix CDs to give away right here! Time to get your dancing shoes on and dust off those dance moves. The sprinkler is a firm favourite with the running man coming in a close second…. but don’t tell Vin or he might withdraw his generous offer.

Follow this blog (see on the LHS of the blog)

I Can’t Live Without

How to stay motivated